VOX: From Spain to Spain 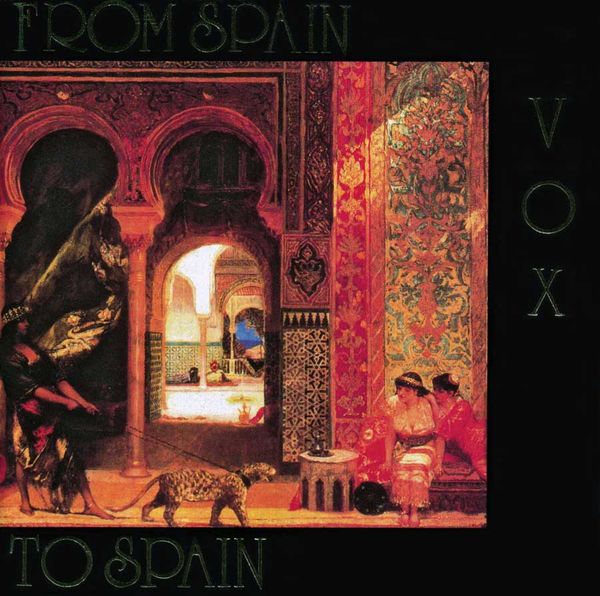 A Musical Journey through Historical Times and Geographic Spaces.

amazon customer rating, 19.07.2000: 5 out of 5 stars: "Back to the future:  Well , if you ever had dreams of how it was like in the 8th century , with this CD you can dive back into those years and get the atmosphare (not just the musical one) . With divine voices and a combination of these days tools with the old ones, there is no other word but perfect . Listen to this CD ( i hope you gonna loop on the last track as i did) and get the best of all worlds , these days and those ancient ones. "

Numerous visions, adventures and miracles were experienced by Middle Ages pilgrims on the 'Camino de Santiago', the path to the grave of Saint Jacob. Many of these miracles were recorded in the earliest Spanish songs, the 'Cantigas de Santa Maria', in the 13th century. Christian an Moorish cultures meet each other in these songs, which tell of mysterious happenings in actual places on the road to Santiago. The 'Cantigas de Santa Maria' encompass both the most powerful and the most intimate music of the Middle Ages. We can detect within them the nucleus of the melting pot which makes up Spanish music: old Indian gipsy tradition, musical traces of the Arab conquerors, the flamenco and a good deal more. With the return of the Spanish Arabs to North Africa and Spain's occupation of South America, these traditions became a part of the music of three continents. In the new production entitled 'From Spain to Spain' Vox is combining a musical Odyssee through Spain, Africa and South America with a journey in time covering eight centuries. This new creation of the medieval cantigas, with old European and Arab instruments, traditional singers from Spain, Portugal, North Africa and Lebanon and also featuring the electric Rai from Morocco, the vibrating living heirs of this tradition, as well as Brazilian rhythm, transforms them into a virutal reality with the application of computer acoustics. The music of three continents and the history of Spanish music are united to provide a simultaneous experience of various cultures and ages.

From Spain to Spain
Music which relates stories and is itself history. Currents of various music cultures which converged at different historical and geographical points and then - driven by the course of history - had to drift apart again.
A musical Odyssee through Spain, Africa and South America is bound up with a journey in time through the centuries. Mediaeval Spanish cantigas and old European and Arabic musical instruments are foil-like overlain by the electric rai from Morocco, South ~ American rhythms and electronic sounds. Simultaneous music history: the music of three continents and the history of Spanish music blend into a simultaneous experience of varied cultures and time.

I. Entrada
The year 711 - a new religion, a new spiritual and intellectual force, pushes its way into Europe, into the Spanish realm of the Western Goths : Islam. The Arabs bring with them war and destruction - nothing new for Europe. But they also bring something new, or long since forgotten, in Europe: Greek philosophy, medicine, art and architecture, a music theory which revolutionises European music history, and musical instruments from which the majority of European instruments will evolve. Christians living in the Arab caliphates and quite freely practising their religious beliefs, take over elements of Islamic Koran reading in their liturgical vocal style and develop Mozarabic singing. Following a dispute with his teacher, the flute player Ziryáb flies in the 9th century from Baghdad to Córdoba and establishes the Arabo-Andalusian music tradition. Artists from the Orient and Occident write poems and make music at the Arab courts of Córdoba and Granada.

II. Bells for the Virgin
In the year 1031 the caliphate of Córdoba degenerated into small independent kingdoms. The concept of the Arab as an enemy is the source of a new, counter-moving power potential: the constant feuding among the pettry Spanish princelings develops into cohesion of the Christian matamoros = Moorkillers. In the name of the Holy Virgin and of the saints, the Spanish Christians of the North launched an offensive which was to change entirely the future conception of the world. King Ferdinand I of Castile in the 11th century conquered León. In 1082 his son Alfonso VI advanced to Gibraltar, and three years later captured Toledo. An adventurer from Burgos, Rodrigo Diaz, called "El Cid", fought as a mercenary alternately on the Arab and Christian side, and in 1094 conquered Valencia. For: "He who places all his hope in the Virgin shall enjoy her good protection."

III. Maravillosos
The impetus of the Catholic Reconquista nourished new centres of European culture. In Spain'ss monastery regions priests from all over Europe were trained in the arts, the sciences and music. In the scriptorium (writing room) of Ripoll monastery handwritten documents were produced in the 10th and 11th centuries with Mozarabic influenced hymns and plainsong. A quarter of the 72 pillars of the San Cugat cloister bear depictions of animals originating from the Indian tradition, and are symbols for various tonal pitches. In the course of a day the sun's rays shine on the various pillar capitals and indicate the notes of the hymn to Saint Cugat. Since its foundation in the 11th century the monastery of Montserrat was a cultural centre of the highest order, some of the monks there had studied in far distant universities, such as Paris or Bologna. One of them produced a music manuscript documenting church dances.

IV. The Guiding Star
Jacob was born in Jaffa in the first century. Jacob - Jago - Santiago went to Spain to preach. Later he returned to Jerusalem. One century after the death of Jesus he was beheaded by Herodes Agrippa. His body was taken to Spain and buried there. In the 9th century a hermit discovered the grave, which was said to give off a gleam of light. Today this place is called St. Jacob in the Field of Stars: Santiago de Compostela. Throughout the centuries pilgrims from all over Europe walked and rode over the Camino de Santiago, the path to Santiago. They experienced many adventures there, including mystical visions and miracles. About 400 of these miracles were collected by Alfonso X the Wise in the "Cantigas de Santa Maria". Alfonso the Wise gathered about him Moorish scholars, poets and singers, as well as the troubadours from Provence. As he wrote in the dedication of the Cantigas Manuscript, his greatest wish was that the Mother of God should hear him as her troubadour. Alfonso reigned from 1252 until his death in 1284. During this period he encouraged in an exemplary manner music and musicians, poets, scholars, astronomers, artists and philosophers. Barcelona and Toledo, where Alfonso held court, were gathering points for actors and poets, Jewish and Moorish bards and storytellers, troubadours from France and the German realm. The songs of the wise king tell of events along the pilgrims' path. To a major extent the places still exist where all this happened, and are still visited down to the present day. Christian and Moorish elements meet in the Cantigas, poetry in the style of the zejel, recited to oriental instruments, confronts Latin plainsong in the Roman tradition. In the Cantigas de Santa Maria we discover the nucleus of the melting-pot which is called Spanish music: Jewish songs, the musical traces of the Arab conquerors, the flamenco and a great deal more. The guiding star of SaintJacob led countless people on the path to the field of stars. Their wanderings, set down in the Cantigas and reliefs above the portals of innumerable churches on the path to Jacob to the present time define for the Western world the essence of travel.

V. While the birds sing
In the 15th century Granada is Spain's most prosperous city. Despite the constantly growing threat from the Christian kings, trade is flourishing there, and with it also architecture, literature, the natural sciences and music. In the last days of the Moorish realm life in the Alhambra is being enjoyed to the full. The rough warriors of the African mountains had developed into poets, scholars and artists. The interior of the Alhambra palace is music shaped in stone. As in Arabo-Andalusian art music, the núba, the ornaments on the lightweight building material, proliferate in a seemingly endless process. Cypresses, orange trees, jasmin and myrrh bushes permeate the whole palace with various scents. For the former desert dwellers the most important aspect of all is that water in fountains was present everywhere. It is simultaneously a feast for the eyes and a delight for the ears. The scented breath of air, splashing of the water and the singing of the birds are also referred to in the poetry of the Arabo-Andalusian art song, the muwaššah.

VI. Deus ex machina
machina: Latin for "besieging machine / Platform for displaying slaves for sale." As a result of the marriage of Isabella and Ferdinand, Castile and Aragon amalgamate in 1469. The marriage of power politics, religious zeal and natural science is the source of yet another new impetus. In 1492 it washes away the Spanish Jews and Muslims from Europe, and in its tidal wave enable Columbus to discover America. Los ReyesCatólicos - the Catholic kings - create god from the machine: timber contraptions besiege Arab Granada, the Inquisition slaughter Jews, Arabs and heretics on wooden instruments of torture, the New World is discovered with the help of timber ships and on wooden platforms American Indians are sold as slaves. The modern age has begun.

VII. He who loves you
With the exodus of Jews and Arabs, and Spanish colonisation, many elements of Spanish culture, of Iberian music, are borne across the Mediterranean to Africa and the Atlantic to America. The music of the Moorish conquerors, which in the preceding centuries had fused with other music styles of Spain, had from the very outset been interspersed with musical elements from West Sudan and South Africa. In America in the succeeding centuries the music of three continents blended: Europe, Africa and the New World.

VIII. Miragre
Nor was the machinery of Spanish Catholicism an enduring magic potion. The New world, for a long period under the influence of Catholic colonisation spirit, soaked up the alien cultural and political currents and let a cultural amalgam come about which today pushes way into the background the formerly omnipresent late Middle Ages Christian spirit. Musical world domination today is held by the current of Afro-American rhythms, which were previously the eager-to-learn stepchildren of European colonisation.

IX. The Landlord / The Bearer of the Cups
The spirit of the Middle Ages, the dream of a civilisation in which the three world religions can live in peace with each other, has never been entirely abandoned. Whether it is descendants of the SephardicJews driven out of Spain and now in Salt Lake City or North Africa, or the progeny of Arabo-Andalusian mixed culture in present-day Spain: in little wine bars and taverns in many different countries a drinking songs is still sung today with an Arab-Spanish Jewish text. The landlord, to whom the thirsty drinkers plead for another glass of wine, can be God, Jehovah or Allah. The cup of wine, which the innkeeper only reluctantly pours out, is the little span of life which everybody yearns for in addition to his allotted time.
©1992 Dr. Vladímir Ivanoff