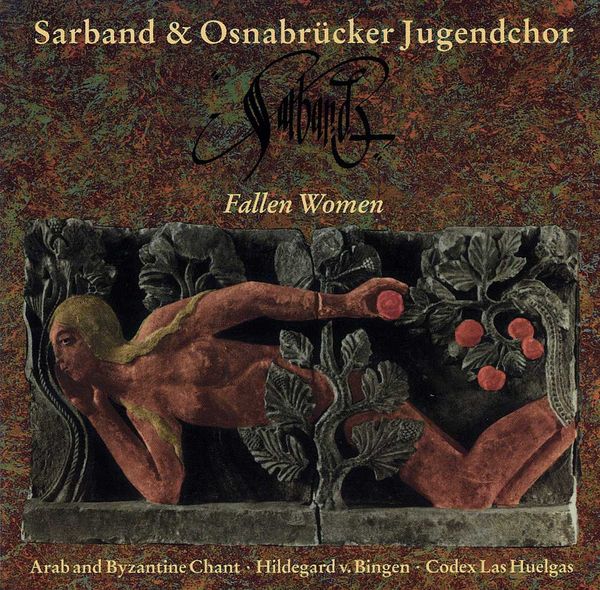 "…some of the most gorgeous Early Music available on disc." Mary C. Dalton, Renaissance Magazine Online, 2002

SARBAND
Vladimir Ivanoff, director
Fadia el-Hage, Beirut · voice
Belinda Sykes, London · voice, shawm
Marianne Kirch, München · voice, dulcimer
Vladimir Ivanoff, München · frame drums, ud
Osnabrücker Jugendchor
Johannes Rahe, director
Conception of the program & arrangements: Vladimir Ivanoff
More Reviews: "Before you decide from the disc's title that this is yet another Anonymous 4 clone, believe me, it couldn't be further from it. Although we hear some familiar chants among the rare and there are women singing them, they're performed in such a different style - often with instruments (shawm, dulcimer, drums, ud), an added chorus (including men), and sometimes a deep-voiced drone - that we find ourselves in an entirely different world (literally) from that of Anonymous 4's ultra-refined, pure-voiced, ethereal idiom, essentially influenced by central and northern European chant traditions. Sarband's roots are more earthly - and centered in Eastern Europe and the Mediterranean - yet its musical foundations and vocal expressiveness are equally grounded in the spiritual realm. Many of the 18 selections - from ancient manuscripts including the Codex Las Huelgas - feature a prominent solo voice, in this case the captivating Lebanese singer Fadia El-Hage, whose technique recalls the highly ornamented, melismatic forms of today's Middle Eastern/Northern African popular and religious music, where lines are elaborately shaped with curlicue turns, where a single pitch is stretched and bent and reshaped with inflections as complex and varied as those of spoken language. At other times, we hear a chorus, but its role - largely conceptualized and arranged by Sarband founder/director Vladimir Ivanoff - is unlike what we're used to in early chant repertoire. Unisons, fourths, and fifths abound but the ensemble singing is far more dramatic, driven not only by the text and its natural accents, but also by an apparent desire to engage the listener's senses beyond the spiritual. Have you ever heard the Easter chant Victimae paschali laudes performed almost as a dance? Many of the chants come from Hildegard von Bingen and ninth-century Byzantine female composer Kassia; others are adapted from Arab-Byzantine oral traditions. All are performed in a style that will not only surprise most Western listeners, but also encourage us to rethink the nature of religious singing tradition in the early church. There has been much attention lately devoted to reinvestigating and reimagining the origins, practices, and development of Christianity. In that regard, this recording, whose performers seek to explore the "possible links between European music and the Islamic and Jewish musical cultures" offers not only an enjoyable musical experience, but an enlightening one as well. " arkivmusic.com
"Subtitled Women as Composers and Performers of Medieval Chant, this 2001 release is a mesmerizing program of early Christian women's chants - expressions of women's spirituality, rooted in mysticism and seeking ecstatic connection with the infinite - in spite of a 4th-century ban which forbade women's chants in the liturgy! Founded to demonstrate the relationships between European early music and the musical cultures of Islam, Sarband is a fascinating, lively and authentic international ensemble of musicians from several Middle Eastern and European countries, including Lebanese vocalist Fadia El-Hage (known to our listeners for her work with Vox), and UK vocalist and shawn/bagpipes player Belinda Sykes. Here they perform chants from Middle Eastern churches; works by Hildegard; chants by Kassia, the most significant female composer of Byzantine church music who wrote during 9th century; and from Codex de las Huelgas, a large collection of liturgical and secular works sung daily by the Cistercian nuns of the convent of Las Huelgas de Burgos. Recommended!" ladyslipper.org