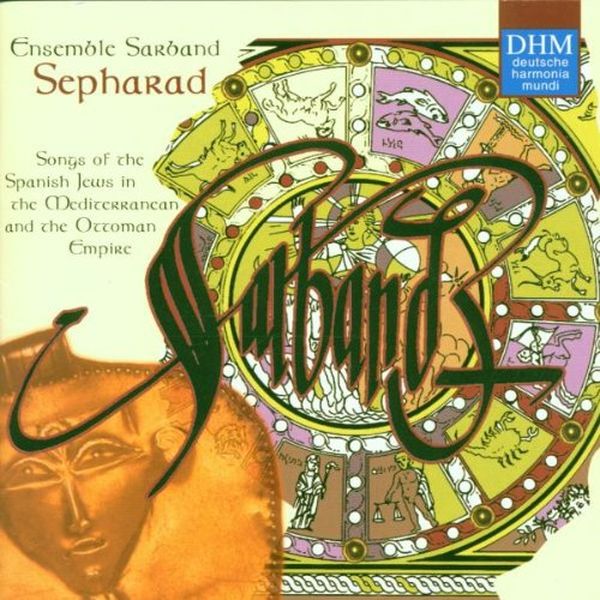 Order the CD or download: after you place your order, you'll immediately receive a mail with the link for download of the tracks in high mp3 quality, lossless FLAC or CD quality WAV files, with a printable booklet (49 pages with lyrics translated in 3 languages)  in high resolution.

"Throughout this recording, El-Hage's voice is enchanting, subtly expressing the many emotions that run across these songs. In all, Ballads stands up as an excellent record of a musical culture that artfully combined European and Arabic elements and still managed to survive several centuries worth of exile.“,
Folk Tales Magazine, 31.10.2000

concert program on the web site of  Sarband

The album’s title is deceptively straightforward. It describes the temporal and geographical sphere but the complexities of the music of the Jewish Diaspora is one to which Vladimir Ivanoff’s notes do full and absorbing justice. Jews reached the Iberian Peninsula in the Roman times and they lived unusually unhindered lives until the expulsion of 1492. Inevitably the dispersal, to Italy, France and Germany was augmented by further exile to Egypt, Syria and Palestine and other sovereign states of the Ottoman Empire. The Sephardic Jews took with them their music, nurtured in Spain, and to a greater or lesser extent sought to maintain their Spanish traditions, but in time they became influenced by their host traditions, and a variety of new rhythmic and modal aspects accreted to the original songs. In time the Western and Eastern Mediterranean traditions became independent, hence the dichotomous title of this disc, which reflects the divergence of the original tradition, the two ways in which Sephardic Jewry made music

Prominent in the tradition is the solo female voice and the locus classicus of the music was the Spanish Romance, though this was augmented by a variety of lullabies, cradle and wedding songs. Here the group Sarband have augmented these original Judeo-Hispanic songs with later examples from the nineteenth and twentieth centuries and creative examples of the Balkan inheritance. The band consists of two female singers and a four piece instrumental ensemble augmented by Ivanoff who also plays percussion and lute. The Balkan selection of the disc opens with some wedding songs; the first is quite stridently sung, I assume, by Fadia El-Hage whereas the third is couched more in the early twentieth century salon vernacular and sung – again it’s a reasoned assumption - by Belinda Sykes. This type of juxtaposition sets up the kind of resonances that sound throughout the disc; the historical, the refracted, the living tradition that stretches through continents and centuries.

The instrumental accompaniment is various and colours the songs – flutes, kettle drums, the psaltery, fiddle, lute and a battery of percussion. El-Hage displays a coloratura and control of the melismatic writing that are both mightily impressive, not least in the Bulgarian Romanze, whereas Sykes deploys her more expressive lyric voice in the spare Anderleto. There are interesting interludes along the way, the rather Dowland-like piece by the sixteenth century Pisador, the more obviously "Spanish" rhythms of Gerineldo, and the early twentieth century "Western Jewish" sounds that begin to emerge.

This is something of a voyage, musically and geographically, and it’s accompanied by fine and elegant notes, a sympathetic acoustic and very nicely produced artwork.