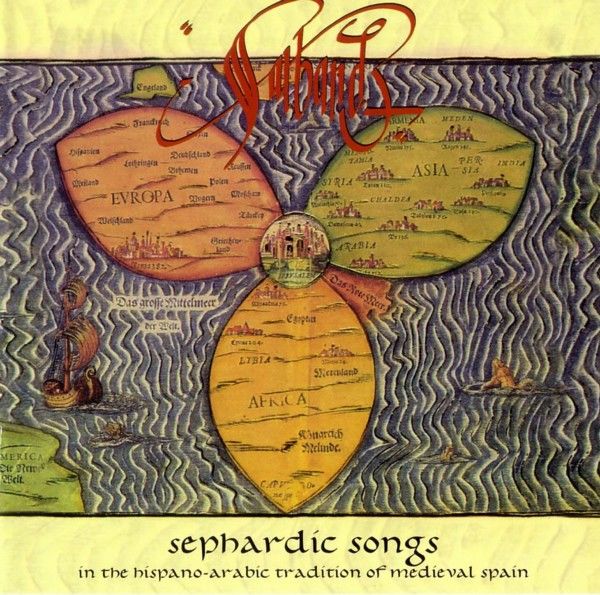 "… very sensuously performed, very passionate. … This is an impressive release; the performances are sensitive, conveying well the moods of the music, and the sound is excellent." Crawford, American Record Guide 63, 04-05/2000

concert program on the web site of Sarband

Sephardic Songs  in the Hispano-Arabic Tradition of Medieval Spain

The Sepharad sphere of influence was initially only embodied in the word of the Bible. Its geographical location was as yet undefined when Genesis pointed the way and the Israelites left the land of their fathers. Over the centuries, the term "Sepharad" gained in cultural, religious and historical significance. Since then, in addition to a place of exile, "Sepharad" has held a promise of a religious conviction and of cultural self-determination.
Over two thousand years ago the Jews fled from Nebuchadnezzar and the ruins of the Jewish empire and gradually crossed the Mediterranean. Since Roman times there has been evidence of Sephardic Jews in the Iberian peninsula. In the year 589 Christianity was declared the official state religion by the ruling Westem Goths. Exercising repression in the form of forced baptism and death threats, these new Christians forced thousands of Jews to leave the Iberian peninsula. As a result, those Jews who remained behind viewed the Islamic conquest of Spain in the year 711 more as a liberation than a threat. In the Muslim state order Jews had the opportunity to rise to high positions in the government and administration. The Jewish communities in medieval Spain were therefore strongly linked with the Muslim emirates and especially with the caliphate of Cordoba. The Hispano-Arabic Middle Ages represent an important chapter of Judaic history. Having participated in the golden age of classical Arab culture in the Near East, Jews played an important role in Spain as mediators between Arab and Christian culture, and Jewish poetry and music consequently reached a new pinnacle. In the 13th and 14th centuries Jews were also musicians at the Castilian court. Along with Arab musicians they played an important role in the performance of the "Cantigas de Santa Maria" (eleven of which tell of Jewish life and culture in Spain), compiled by King Alfonso el Sabio (1252-84). At the court of Sancho IV, along with thirteen Christian and fifteen Arab musicians, the Jew Ismaël played the rota and accompanied his wife when she danced.
The 14th century[sic], when the Catholic reconquest of Spain made considerable progress, brought the harmonious co-habitation of Spanish Christians, Jews and Muslims to an end. The pogroms and persecutions of 1391 led to mass conversions of Jews and Muslims. The mid-15th century saw the establishment of the Inquisition, which accused many conversos (those who had converted from other religions) of practicing their original beliefs in secret
The exodus of Hispanic Jews began on August 2, 1492. In the course of just a few months it is believed that over 160,000 Jews were forced by the Catholic monarchs Ferdinand and Isabella to leave Spain and all Spanish sovereign territories in a most undignified manner. Many Sephardic Jews fled to French Provence. Hispanic Jews who had converted to Christianity also settled as late as the 17th century in Bordeaux, Marseilles and Bayonne, after they too had been forced to leave Spain and Portugal. Many Sephardim sought to start a new life on the North African coast. The majority however, 60,000 or more in number, found a haven in the sovereign territories of the Ottoman Empire: in Constantinople, Thessaloniki, Smyrna, Adrianople (Edirne), Gallipoli, Ankara, in Egypt, Syria, Palestine and the Balkan states. As Sultan Bayezit remarked on the exodus of the Sephardim: "It is said that King Ferdinand, King of Castille and Aragon, is a clever man, but by driving the Jews from his own country, he is impoverishing his empire and enriching mine." Sephardic communities were also established in Italy (Ferrara, Livorno), after the end of Spanish role in the Netherlands (Amsterdam), in Germany, Austria and the New World.