Sarband: What the World Needs Now 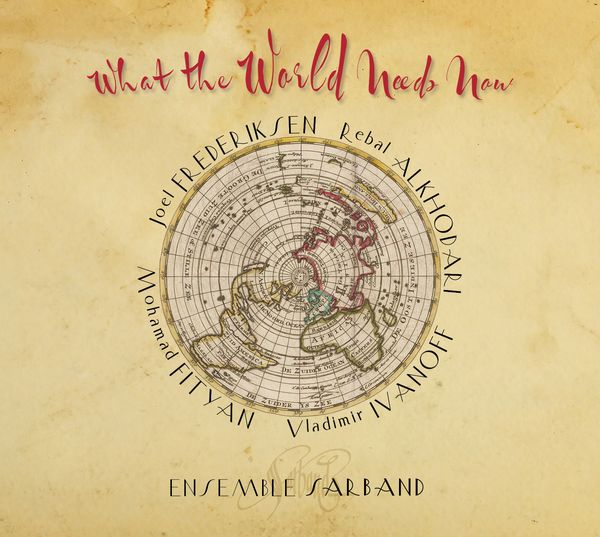 Sarband: What the World Needs Now …

CD & downloads in 3 formats (with interactive booklet, including lyrics & translations).

Only at Sarband's web shop: The Muse Alliance

More about the program on Sarband's web site:

«There is a lot to discover in the concert: farewell and hope for reunion, homeland and outland, travels to the horizons, and human warmth. To express these hopes with songs from the homelands - with the feeling to be at home - the listeners experience this through beguilingly sweet bridge buildings. Closeness and yearning remain the poles of this ravishing evening … Far from the veils of folklore, creates an intimate liaison with the omnipresent topic of love. Sarband revels in poetry. “What the World Needs Now” becomes an impassioned plea for love between human beings. What the world needs now is love, not only for some, but for al - A peaceful fusion of cultures instead of the noise of war - Considering the contemporary development of conflicts between orient and occident, music as a lead would be the better alternative.» Robert Dotzauer, www.onetz.de, 31.8.16

«An excellent crossover of times and spaces … Wonderful to experience, how the artists from different origins in this exciting quartet, all living in Germany, found a common third homeland in their music. And their message, that love will overcome all wars - definitely to co-sign.» Antje Doßmann, Neue Westfälische, 1.8.17

American bass singer and lute player Joel Frederiksen and Syrian singer and oud player Rebal Alkhodari sing about love, which conquers everything and unites all, and accompany themselves on their lutes. Mohamad Fityan and Vladimir Ivanoff, experienced bridge builders between Orient and Occident, complete the travel party with nay, percussion and oud.

Farewell and the hope for reunion, the tension between home and the unknown, travels to the horizons, human warmth, closeness and longing: two Syrian musicians, one American and one Bulgarian, all migrants in Germany, make music together. They present the songs of their home countries to each other, their geographical, but also their musical homeland, formed by their personal interests.

With Italian baroque arias and American folk songs, Arabic art songs, and compositions they created themselves, they establish a common homeland. And they hope that their endeavors are an incentive for some to do the important and simple - to reach out one’s hand. In this era with its seemingly never ending political turmoil and human disorientation, the willingness of every individual person to shake hands is maybe the most effective political statement: the power of love.

Love is nurtured by desire. In the American version of the British ballad “Pretty Saro” (1, from around 1749), the longing of a lover in a foreign land (America) for his unreachable beloved gives him wings of hope with which to fly. Sometimes, passion changes into suffering. The Scottish-American folk song “Black is the Colour” (3) is about the farewell from the beloved and how the lover must ”suffer death ten thousand times” before being reunited. In „The True Lover’s Farewell“ (9), in order to reassure his beloved that there will be a reunion, the lover even conjures all the forces of nature together.

When love dies, with it also hope might wane, and rage awake. The English-American ballad “Nottamun Town” (2) describes an apocalyptic scenario, the end of all time, the endless desperation and loneliness of the individual amongst the ten thousand that “ got drowned that never was born”. Bob Dylan used the conjuring power of this song’s melody for his “Masters of War” (2), to hurl his shocked fury at the powerful, the racketeers, the plotters of the war in Vietnam. In his “Triumph of Love” (14), Joel Frederiksen cites the melody of “Black is the Colour” (3), hence expressing his desperate feelings about the tragic situation of today’s Syrian refugees, but also his hope for our tolerance and the awareness of our personal responsibility.

The horrors of war can be so terrifying, that they even suffocate the fury of its victims. In „Ya baiti“ (4), Rebal Alkhodari describes the loss of his home and family in Syria with a weightlessly hopeless melody, loaded with melancholy.

Juvenile yearning still does not know about the finitude of love. The Sephardic (Spanish-Jewish) lullaby „Nochez son d’enamorar“ (5) tells about a young girl who, because of her longing for the first night of love, is not able to sleep. Her mother advises patience, because the pleasures of love will end soon enough, when she grows old and ugly. On the contrary, the wedding guests singing “Venimos a ver” (6), by building them a stairway from gold and ivory, wish the young couple a long and bright future.

In Arabic art songs as well as in 17th century Italian monody, supple virtuoso ornaments help to express love’s bliss and passion. In Giulio Caccini’s “Muove si dolce” (7, from the intermezzo “Il Rapimento di Cefalo”, Florence, 1600), Joel Frederiksen performs the original ornaments by Melchior Palantrotti, the Italian singer for whom this song was composed. Finally, with some improvised arabesques, he leads the Italian song into the following Arabic Zaǧal „Mala l-kasat“ (8). With expressive ornaments, this erotic song’s meandering melody describes the seductive slender waist and figure of a young man. At first glance, also the Medieval Arabic „Aiyuha s-saqi“ (10) seems to be a bacchanalian song. But in this sophisticated allegory, the drunken lover impersonates the believer, who begs the innkeeper (God) for another cup of wine - God’s gracious love.

Love is an energy which inherently may not have a direction and can also change its target. A wondrous story, the Sephardic romance “Porke yoras niniya bella” (13) tells about the power and the marvels of love. A young Spanish knight sets out to fight the infidels, falls in love and forgets about war, loses his beloved, but in the end finds his lost sister!

Perhaps the most popular of all Sephardic songs, “Los bilbilikos kantan” (15), paints a moving picture of love’s passion and suffering over an unforgettable melody: “The nightingales sing on the flowering tree. Below sit those who suffer of love.“