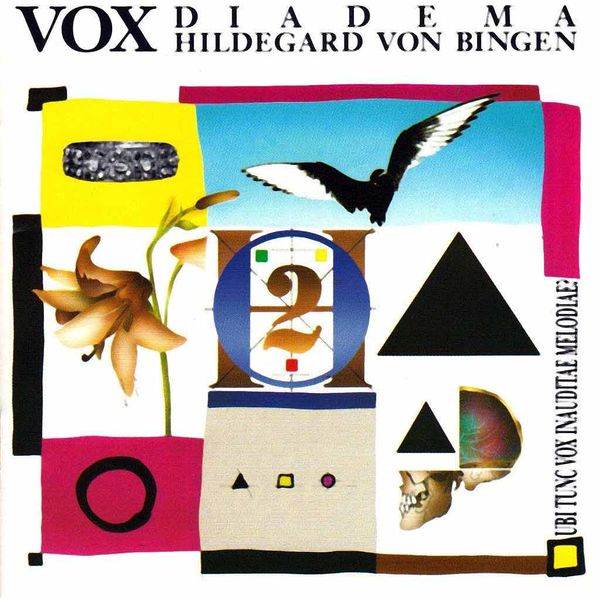 "A fascinating combination of sound, which does not question either past or present but seduces the listener with its clear beauty." --Frankfurter Rundschau, 9.2.1991

"Vox have succeeded beautifully in interpreting this truly spiritual music in such a way that its depth and relevance are more apparent than they would have been through a strictly traditional performance." Heartbeats, Spring 1992

"Producer/Arranger Vladimir Ivanoff maintains the purity and mysticism of the original hymns, but brings them into a virtual cathedral." --John Diliberto / Echoes, 1994

"Vox has handled this project very tastefully and the end result is a consistently classy production. Each song uses different and interesting soundstaging techniques." the absolute sound / The High End Journal 11/91

Medieval Electronic Music In Authentic Performance'? The incorporation of electronic music for the interpretation of Hildegard's songs is a symbol of Musica Mundana, the cosmological music which contained the harmony of the elements, of the spheres and of the seasons. Whereas our perceptive faculties extend at most to the harmony of the instruments and the harmony between intellect and soul, that of Middle Ages man was a much more sensitive one and more integral.
He heard what he felt, smelled, knew and saw. For instance when he saw the wide open jaws of a stone demon statue above a gate, he felt with his senses that it was shouting. With augmentation of the authentic range of instruments and the true text vocal practice by computer-acoustic style means, VOX intends to achieve this hearing which can no longer be captured with our senses. It thus paints for the present day the picture of a sensitive whole of the visionary, apocalyptic and mystical music of Hildegard.
VOX, owned, produced and directed by Vladimir Ivanoff, is a group of musicians who have dedicated themselves to the significance of Early Music for our times. The interpretation of medieval music by Vox is a game with various levels of performance. Vox is crossing the borders of traditional historical performance by incorporating today's means in order to give the listener a more intensive appreciation of medieval music, to exemplify the dimensions of historical estrangement and to give medieval music a sensual quality beyond simple exotic interest. Computer acoustics, experiments with electronic soundscapes, live electronics and possibilities of digital sound-shaping are symbols of the musica mundana and allow us to experience the visionary character of medieval music. The music of Vox mirrors the soul of the Occident. It is a fascinating journey into our own past.
VOX

Saint Hildegard von Bingen (born 1098 in Bemersheim/Bergen, near Alzey (Rhineland Palatinate), died 17th September, 1179 in Rupertsberg near Bingen) was a mystic and seer, an adviser to popes, emperors and princes. She wrote numerous theological, scientific and medical works. Since childhood she had been haunted by mystic visions, which she recorded in a series of writings and incorporated in her songs. With their expanded tonal range, broadly vibrating melodies, the structure based upon a few melodic elements, Hildegard's songs form an integrated world of their own. Her language is marked by brilliant figurativeness, and has the apocalyptic character of her visionary writings.

The melisma of the songs exceeds everything to which one is accustomed from the Gregorian chant: long-drawn out melodic phrases frequently stride through an entire octave. Hildegard has a particular predilection for wide intervals, fourths and fifths, which she often uses as the opening interval, in many cases superimposed upon each other.
In the 13th section of the Scivia, a representation of harmonia caelestis (sphere harmony), she explains her musical activity: "Deinde vidi lucidissimum aerum, [...] in quo audivi in omnibus praedictis significationibus mirabili modo diversum genus musicorum in ludibus civium supernorum s gaudiorum, in via veritatis fortier perseverantium, ac in querelis revocatorum ad laudes eorumdem gaudiorum [...] Et sonus ille ut vox multitudinis in laudibus de supernis gradibus in harmonia symphonizans, sic dicebat [...]" "I then saw the brightest light in which I [...] heard various kinds of music, praising the joy of the saints, brave and steadfast on the path to truth. [...] And that sound, like the voice of the praising multitude, in lofty steps combining in harmony, spoke as follows [...]"

Hildegard uses the term "symphonia" to describe the heavenly harmony, the inner harmony of manknd, the harmony of the sounds produced by voices and instruments. The soul of man is meant to represent symphonia and harmonia within itself. Hildegard sees man in the wholeness of his nature, of his being, and therefore transfers to him analogous tonal and musical illusions.

When Hildegard was on her last journey, the monk Volmar, one of her secretaries, in a letter written about 1170 laments the absence of the abbess with the words:
"Ubi tunc vox inauditae melodiae?" "Where is the voice to this unheard melody?"

This question was the reason for the foundation of Vox, a group with musicians from Germany, Italy and the USA, which examines the significance of ancient music for our age . Playing early music in a way called authentic performance practice has in recent years been occupying an ever larger role in our music life, but the quality of the authenticity is seldom questioned.

Three basic levels of authenticity can be defined:
— The attempt to reconstruct a concrete performance from times gone by, if possible in the corresponding spatial setting and with the original musical instruments. Realisation of this idea faces limitations: neither the historical musicians nor the historical audiences exist today.
— The attempt to decipher the musical structure of historical compositions form the manuscript sources and to convey this to present day listeners in a perfomance which is "true" to the original. Differences exist here due to our listening behaviour, which has greatly changed since the Middle Ages. The same sequence of notes orthe same sound is perceived by a present-daylistener quite differently from was the case in the Middle Ages.
— The attempt to convey to the present-day listener similar impressions to those which Middle Ages listeners experienced when perceiving a certain word; that is to say, the perfomance media are adapted to present-day listening behaviour. The performance of a piece by 7 or 8 musicians left the impression in the Middle Ages of powerful sonorous concentrations, but is regarded by the modern listener as chamber music if the formation is not altered.
The Vox Ensemble's interpretation of Hildegard's songs is a perfomance with these three levels of authentic presentation of medieval music.

The intensive preoccupation with the writings in which Hildegard's songs have been handed down (Wiesbadener "Riesenkodex", Villarenser Kodex in Dendermonde) made it possible to develop a vocal style true to the text, taking into account the specific vocal ornamentation formulae for Hildegard's music. The accompaniments, preludes and interludes of the medieval instruments (flutes, vielle, portative, hurdy-gurdy, frame drums) accord with the performance customs during Hildegard's time.

While present-day man is acquainted with the first two elements, also in their interaction, our senses can no longer grasp the function of "world music", the musica mundana. Middle Ages man experienced the meditative immersion in music always in the consciousness of the fateful participation of the celestial sphere, his sensitivity was integral - he heard what he felt, smelt and knew. As we are aware from various sources which have come down to us, he was often capable of perceiving with his senses as a shout the wide open mouth of a stone demon statue above a church door.
Our hearing now is materialistic; we hear real acoustic events, our consciousness adds to what is heard only few ideas form other perceptive or sensory sectors. As a result, at least one element of medieval music - musica mundana - remains for us a closed book.

This fact was the reason for Vox to go beyond the boundaries of conventional performance or medieval music, to apply the means of our day and age, thus making it possible for present-day listeners to acquire more intensive access to music of the Middle Ages, to make this music more available to the senses, proceeding further than the purely exotic attraction..

The inclusion of computer acoustics, electronic sound spaces, live electronics and digital alienation possibilities is a symbol of musica mundana; it allows us to experience the visionary character of Hildegard's music and to interpret the apocalyptic content of her texts. With the amalgamation of text-authentic vocal practice, MiddleAges instruments and the technical means of our age, we are painting for the present day our picture of the three-fold entirety of medieval music.